Mountain… Snow? Ski? Snowshoeing? Nope, I wish we could have driven up to Tahoe to enjoy some fresh snow for a change but between road closures and the COVID omicron variant frenzy, we didn’t. But we still have mountains around the Bay, we are that lucky to live in such a unique place, let’s never take that blessing for granted!

Familiar with the Alps, I’ve always been somehow circonspect when hearing about the Santa Cruz… Mountains for instance. For sure, there are some good uphills around here, but mountains? Well, let’s look at the definition of Mountain Running. Back in 2016 when I took the Pacific Association MUT Chair responsibilities after Bill Dodson, our Grand Prix had basically been exclusively about Ultra Running for its first quarter of century. Intrigued by the MUT acronym, standing for Mountain, Ultra, Trail Running, I went to Richard Bolt, our National MUT reference in the US. Richard sent me this for the Mountain part:

Mountain Running.  A race with large amounts of ascent or ascent & descent (250 meters of vertical change for every 5 km).  Can be on roads, trails or mixed surfaces.  Doesn’t have to be on a “mountain”.  Known as “Fell-running” in the United Kingdom although some purists insist fell races should only be over grassy, muddy, open ground and can’t contain any roads or even defined trails.  The World Mountain Running Association was founded in 1985 and modeled after cross country running with short 10km to 15km races and team scoring.  You can find WMRA technical regulations here. 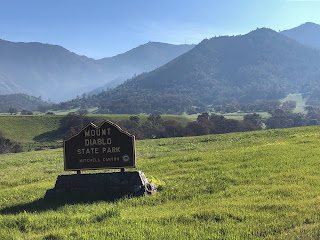 We first introduced sub-ultra Trail races in our calendar and, in February 2020, our first ever Mountain race with PCTR’s Mt Umunhum 14K! Then a well-known pandemic hit… Fast forward quite a few months of struggle around the world, I did spot that Mount Diablo race while working on the 2022 schedule and notice the elevation was matching the demanding standards. I even went over there to run the course, right after the wet and snowy storm over the Holidays, the last miles had turned to a sticky mud fest (fest with sticky mud that is). Not counting a few stops to check on the course directions, it took me 1:14 to cover the hilly 6.2 miles, ouch! But I could confirm the Mountain label eligibility at least, especially with the first super steep 2 miles which gave a taste of alpine running!

Souvenirs of my frosty and muddy January 2 recon: 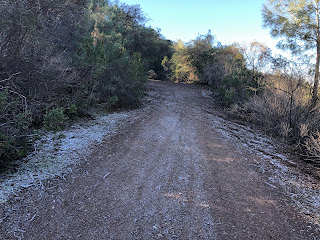 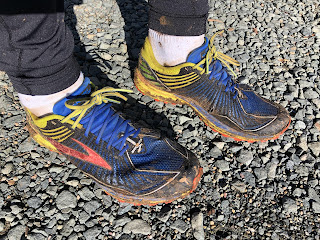 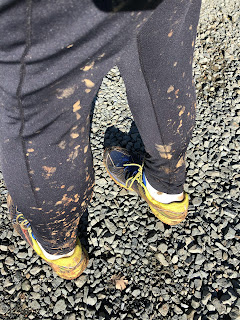 A blessing for us runners, albeit the continuation of our drought calamity in California, we didn’t get a single drop of rain since the holidays, just the moisture of the Pacific fog that this big mountain is able to capture to keep the trail soft but not slippery.

Visiting three weeks ago, I could predict parking was going to be an issue on race day. Agnès and I drove early. That give Agnès ample time to hike her 8-mile loop and for me to see the start of the 30K and half-marathon races. Even hours before the spicy food contest, RD Greg was already on fire and his passion for trail running contagious. Cherry on the cake, the weather was perfect: definitely on the chilly side for me but a few 10K participants were wearing singlets and I ended up on the sweaty side with my long tights and warm gloves and hat. Still, I didn’t regret being on the safe side.

I missed part of the race briefing as I went for a 2-mile warm-up along the nicely flowing Mitchell Creek. There was quite some excitement with close to 50 participants from our Pacific Association, half of them from one single club, Pamakids! Exciting to see speedster Chikara Omine toeing the line after a 2-year injury (same as mind, the hamstring tendon, albeit on the other side). So much excitement that a few runners followed Greg across the timing mats, before the official start, and I believe that explains a 35-second gap between chip and gun times except for Felipe Garcia (more on this later).

From my recon 3 weeks ago, I knew I didn’t want to get stuck in a conga line on Mitchell Rock Trail (I’ve done enough of that in races in Chamonix! ;-). Of course, the small field helped and we actually spread out rather quickly. True to his legend, Chikara exploded right from the start and we lost sight of him rather quickly. He actually had another running I didn’t know, on his heels. I settled in 7th position, right behind another runner from Excelsior, Victor Skorapa. Victor passed Jack Hsueh from Pamakids and it took me another 300 yards to pass Jack as well, trying to resist to the urge of walking. Jack passed me back and I was getting close to the red zone, and impressed that Jerry Flanagan (56, Pamakids) was close behind. I stopped looking behind and gave it all in the long downhill on Eagle Peak Trail, so much that I did catch and pass Victor and clocked a sub-7 mile (after two 9 and 12-min miles on the way up).

Victor passed me back on As I turned onto Back Creek Trail, I could see Benham closing on us, that kept me on my toes and pushing on the next uphill. I passed Victor in the downhill to Donner Creek fire road, then Benham passed me on that flat section. We traded places on every hill, me being faster on the uphills, and inversely. Given the steep downhill leading to the finish, I knew I’d better to push in the last uphill before the Mitchell Rock intersection. I was super pleased to finish in 6th place, in 54:44, 10 seconds ahead of Benham, 2nd Masters behind Jack (46). My first goal was to win my age group, second was to break 1 hour, third was not to fall and break a leg, all of them were met. Still impressed with Jerry’s 56:28 and David Moulton’s 57:34, ah these Road and XC runners! With the three of us being part of the 13 sub-hour finishers, that made for a powerful age group podium! 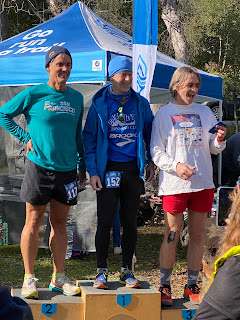 Speaking of podium, the surprise came when Greg called Chikara for second place but Chikara refused to bulge, assuring Greg he finished a few seconds behind Felipe Garcia. Indeed, we can see something unusual with the timing results, that Felipe is the only without the 35-second difference between gun and chip time. My guess is the issues comes from the fact that Felipe followed Greg across the mat before the official start, before getting back into the field. A specialist of winning these shorter PCTR races, Jason Poncy won in a time of 49:32!

Agnès and I were going to meet Greg at the North Entrance after his ride up to the top of Mount Diablo, from Walnut Creek’s Bart station so we left promptly after the award ceremony and missed the fun of the Mount Diablo Hot Sauce Challenge. Well, define fun, that looked like really painful to me, very glad this isn’t part of the MUT standards and definitions, phew!

Huge thanks to the PCTR gang and all the volunteers who allowed us to race on these trails. Nothing better than some competition to push the envelope and test where we stand at the beginning of this new year. Next week we are getting back to the regular ultra format with Jed Smith 50K in Sacramento.

And to conclude, a call for information I had after visiting three weeks ago. Mitchell Park Entrance, Mitchell Rock Trail, Mitchell Canyon, Mitchell Creek Trail, … There is Where’s Waldo?, but what about Who’s Mitchell? I did stop to the Park Ranger and volunteer information booth to ask. To no avail so far. A nice lady said that it was a great and good question, alluded to a former local rancher, mentioned they had a great website and that she will check. Well, I did some searching on the web too and couldn’t find anything except for a contemporary family of ranchers releasing some acreage in… Florida. So, while the assumption of a local family having forfeited their ranch, this still has to be further validated and confirmed. Any hint?

The 30K and half marathon starts, respectively: 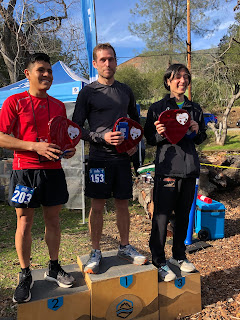 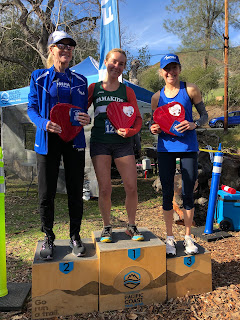 Designed by SMDdesigns | Powered by Wordpress